The development and construction of multi-mission vessels (MMV) remain active in the maritime market.

The ability to multitask when these different tasks are needed is at the heart of the value of an MMV. Multi-mission capabilities mean that an expensive asset does not sit idle when not in use for a single purpose, such as fighting fires. This is especially important for public sector officials who must assess the costs and benefits of a wide range of applications, from public parks to libraries to firefighting equipment.

“There is a growing demand for multi-mission vessels in many industries due to cost effectiveness / efficiency,” explained Ben Littler, communications consultant at Damen Shipyards. “A single vessel,” he stressed, “can cover the work of several, allowing operators to offer a wider range of services to customers. And, of course, it comes in handy when it comes to resale if you can offer the vessel to a wider range of operators.

For example, Littler calls Damen’s Multicat and Shoalbuster ships “Swiss Army Knives”. These MMVs offer capabilities ranging from dredging assistance to sea towing, anchor handling and marine construction. (It should be noted that Damen contracted for the first Multicates to be built in the United States.)

“… And we use it as an aircraft carrier”
Bob Clark is contract manager for MetalCraft Marine, which manufactures a range of MMVs. Clark points out that a boat with a singular mission, for example for firefighting or police work, can be used only 200 to 300 hours per year. With MMV capabilities, he noted, “productivity increases dramatically. You have a much better rig with a lot more gear for a relatively small price increase.

These types of extended benefits are distinguished by the varied roles of a new vessel, the Amwaal, commissioned in 2019, which MetalCraft built for the Prince Rupert Harbor Authority in northern British Columbia.

Captain Bernie Egan is the Port’s Marine Operations Supervisor. He described how the Amwaal will work.

The 60 foot vessel has fire fighting capabilities. It can serve as a crew boat and is used for environmental response, safety and security patrols. It has a scientific research station used for water quality sampling and other environmental projects. And he has a new mission: aircraft carrier.

“We are launching drones from the bridge,” Egan said. Drones are used for port development projects and to monitor port activities. “A much easier effort 200 feet in the air,” Egan commented.

Amwaal’s initial mission, as authorities considered a new port vessel, was an escort vessel to assist LNG carriers transiting to and from a proposed liquefied natural gas (LNG) facility. This project never materialized, but the port nevertheless became more active.

Egan said port officials determined a need for speed, all-weather performance, high visibility and firefighting. The final design is largely based on a pilot boat. “We needed versatility,” Egan explained. “The boat had to be versatile.

The crews of the ships receive cross-training for all missions, with the exception of scientific work on water quality, which is scheduled quarterly. Firefighting training was cut short by COVID-19 because staff could not travel between Canada and the United States. As the restrictions are lifted, this training will resume.

Thinking back to the multi-mission project highlighted by Egan, the value of working with a naval architect independent of the shipbuilder, especially, he added, when it comes to a long distance project. (MetalCraft’s plant is located in Kingston, Ontario, 3,106 miles from Prince Rupert). Egan praised the port’s working relationship with MetalCraft. He added, however, that the eagle eye of a consultant spotted issues and decisions requiring a scholarly response. “We had regular meetings with our naval architect,” said Egan, “and although expensive, he saved us costs by working and fixing the issues he noticed.”

Large ships: a similar goal
The announcement of MARAD’s cutting steel at the end of 2020 for the first of five new National Security Multi-Mission Vessels (NSMVs) was possibly MMV’s biggest news this year.

NSMVs are primarily for education and training, to be awarded to state maritime academies. However, taking on additional roles was a priority.

Van Rynbach was project manager for the development of MARAD’s NSMV), and the company continues to provide technical support for shipbuilding.

Van Rynbach explained that in the past, MARAD had commissioned training ships, to help in emergencies, especially during hurricanes and to provide humanitarian aid. (The training ships are part of the national defense reserve fleet of MARAD, on loan for the custody of the state maritime academies.) 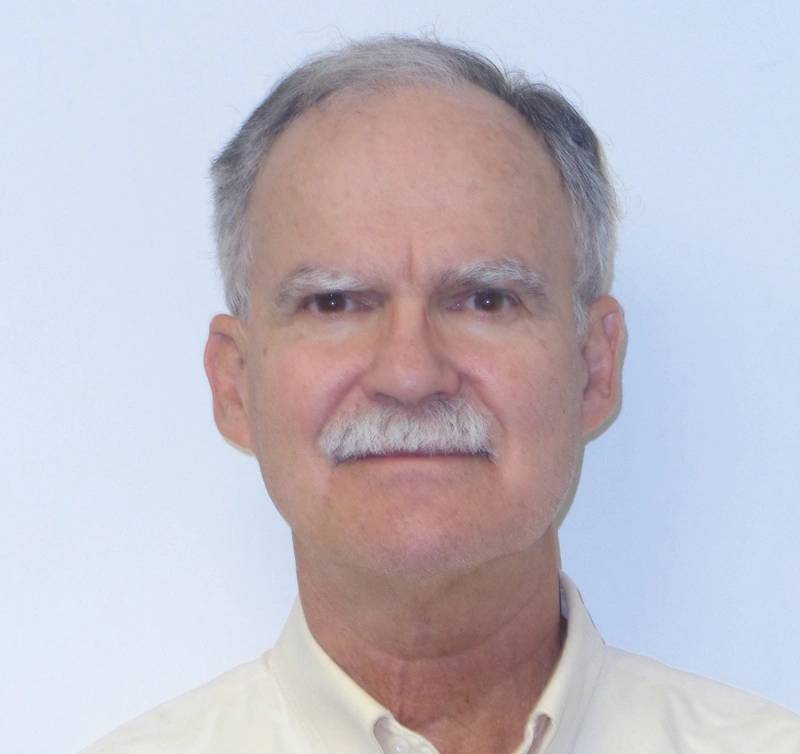 As planning progressed, van Rynbach said MARAD officials kept in mind that training ships were called up for other roles. “It was likely,” noted van Rynbach, “that new ships would also be needed, and decisions were made to design extended capabilities,” to have ships built to respond to emergency missions and with the capabilities to ‘perform centrally, not marginally.

As planned, the multi-mission capabilities of the new NSMV, beyond education and training, will be expanded. These ships will have roll-on / roll-off storage capacity and containers for emergency response missions. Each will have hospital facilities, a helicopter runway and the capacity to accommodate up to 1,000 people at the port. 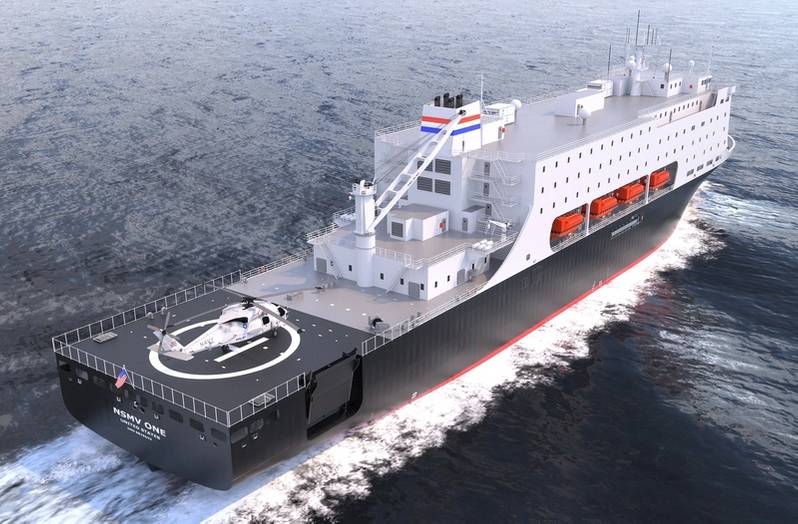 The new NSMV training ships will better meet the training needs of maritime academies while providing the United States with ships capable of supporting disaster response and other critical national needs. (Photo: MARAD)

MMV in commerce
Van Rynbach said that among large commercial vessels, a multi-purpose design is more common in international maritime commerce than in the United States. five holds, separate cranes and removable decks. Vessels are versatile and can carry, depending on a client’s needs, general cargo, project cargo, containers, grain or aggregate.

Similar ships are not used in continental US trade, van Rynbach explained, due to the constraints of Jones Law and the economics of using rail and trucks to move cargo between ports. Americans. However, container ships with additional haul / haul capacity are used between the continental and offshore states and territories of the United States.

More recently, in April, the Coast Guard announced its intention to implement a program to acquire commercial vessels on inland waterways. This new ship construction would replace the current river fleet. The primary mission is the continuation of the USCG’s Aid to Navigation (ATON) services in six regions of the United States, such as inland waterways, the Great Lakes and Alaska.

It is critical work. According to the USCG, the marine transportation system (MTS) accounts for more than $ 5.4 trillion a year in U.S. economic activity. Inland ports and waterways are basic components of VTS; their proper functioning, or not, is an integral part of individual locations and throughout the system. USCG MTS operations include the laying, relocation and retrieval of buoys in navigable river canals as water levels change, the construction and repair of safety-related structures and the specific capabilities required to reach and operate in shallow or otherwise restricted waters.

USCG’s current inland tender fleet includes 35 cutters and 27 barges. The average age of ships is over 54 years, ships are operating well beyond their rated lifespan of 30 years. 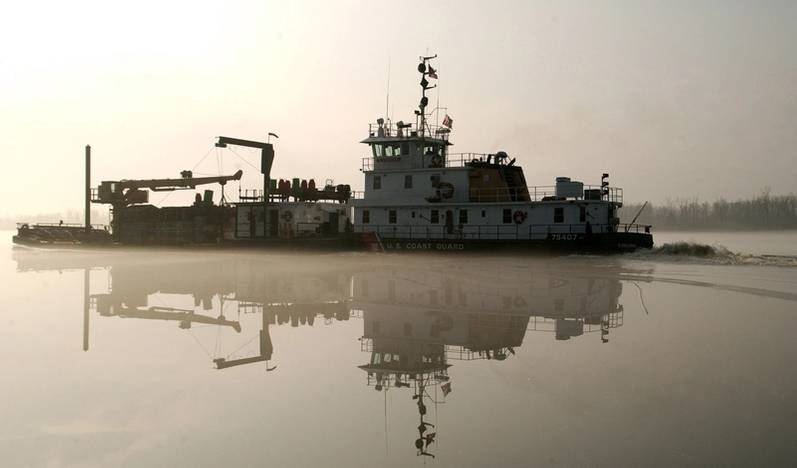 For new trade cutters, a multi-mission perspective is central. The USCG’s preferred alternative is for three classes of ships. The design would maximize “the commonalities among the three classes to reduce sustainment costs, training needs and other associated requirements,” the USCG writes in its program announcement.

All three variants will be monohull ships, meaning self-propelled cutters instead of tug and barge configurations. The variants of calls for tenders for river buoys and calls for tenders for interior construction will be acquired within the framework of a single contract; these variations should be common, with the exception of hull length, working deck arrangements and deck equipment including crane.

Again, ATON is the main mission but the cutters will be capable of side and rear towing, or being towed. They will have capabilities for search and rescue, ports, waterways and coastal security and protection of the marine environment, and will have the ability “to respond quickly and effectively to emergencies such as environmental incidents and phenomena. severe weather ”.

Due to their varied capabilities, integrated and included from the start, these ships will be able to operate 24/7. Downtime with MMVs? Maybe, but not because they can’t do what needs to be done.