The German Federal Technical Relief Agency (THW) was established on August 22, 1950 by the then German Minister of the Interior, Gustav Heinemann. Its first president was Otto Lummitzsch, an architect and construction engineer, who served in a corps of engineers during World War I.

In 1919, Lummitzsch had already founded the precursor organization of THW, the Technische Nothilfe (TN), or Technical Emergency Aid, which emerged from the military corps of engineers. During Hitler’s Third Reich, Lummitzsch lost his job as head of TN in 1934 after refusing to divorce his wife, who was half Jewish.

Since 1953 THW has been part of the German Ministry of the Interior as a federal agency with its own administration. Originally, the agency’s main focus was civil defense in the event of war. But that has changed over the decades, now including a wide range of disaster relief operations such as traffic accidents, industrial disasters, earthquakes and floods.

An army of volunteers

Some 80,000 volunteers are now members of THW, including around 15,000 young people, who spend their free time preparing to help others in need. Membership is organized into 668 locals. Only around 1,800 employees are employed full time in the agency, which means that 99% are hired on a voluntary basis.

The organization has also been active in more than 130 disaster relief operations overseas. Its teams were seen in action after the Indian Ocean earthquake in 2004, Hurricane Katrina in the United States in 2005, and storms Lothar and Martin that hit France in 2000, which became THW’s largest foreign operation to date. 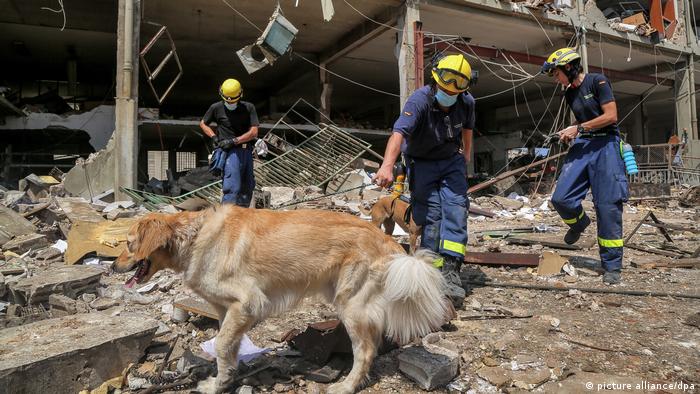 After the giant explosion in the port of Beirut in 2020, THW research teams were among the first foreign aid to the site

Reconstruction of bridges and aqueduct networks

THW teams can be assigned to a wide variety of tasks. There are specialized teams for search and rescue and debris clearance, as well as for restoring water and electricity systems. The removal of oil pollution from water resources can also be done by THW.

During the ongoing flood rescue in southwest Germany, some 2,100 THW volunteers from 165 sections are engaged in disaster relief. This, however, is only a tenth of the volunteers who took part in the agency’s largest national operation to date, when 24,000 THW volunteers simultaneously battled the Elbe floods in August 2002. 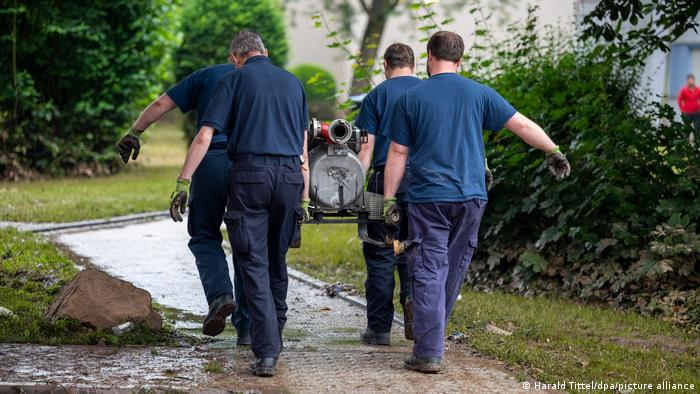 THW locals include specialized teams, called technical platoons, which are equipped with modern machinery to support their rescue efforts.

In the town of Euskirchen, for example, agency teams were battling rising waters from the Steinbach hydroelectric dam with huge rotary pumps capable of pumping 5,000 liters (1,320 gallons) of water per minute, which equates to about a tub full of water every other second. As the dam threatened to rupture nonetheless, THW was able to deploy a monster pump, of which there are only 14 in Germany, to pump 25,000 liters per minute out of the swollen lake.

According to media reports, five THW pumping crews participated in the Steinbach Dam rescue, emptying the lake at a rate of 70,000 liters per minute and ultimately saving all communities downstream from flooding.

How to become a member

As dramatic as THW’s operations often are, becoming a member of the volunteer organization is less so. Anyone can register, regardless of their profession. While the entry age for junior teams is 10, members must be 17 to enter active duty on senior teams.

All volunteers undergo technical training where they learn to use chainsaws, knives and grinders. Some basics of materials science are also taught, as well as first aid and rescue techniques. THW rewards the efforts of volunteers by providing free equipment and protective gear. In addition, the state-funded agency reimburses travel expenses and lost wages during operations and covers the insurance costs of its members.

This article was adapted from German.